In 2005, rugged, jungle-filled Dominica became the first nation to be certified by Green Globe 21 for sustainable development. Nature-oriented visitors appreciate Dominica’s rich culture and history, and this locale has a great deal to offer travelers with a quest for adventure. Located between Guadeloupe and Martinique, Dominica’s mountains soar to nearly 5,000 feet, yielding a thriving rainforest, hundreds of rivers and waterfalls, rare orchids and colorful birds. Geothermal activity results in colorful hot springs, bubbling mud pools, small geysers and Boiling Lake, the second largest lake of its kind in the world. The sites are found in the Morne Trois Pitons National Park, a UNESCO World Heritage Site.

Hikers can trek to numerous of Dominica’s waterfalls including Victoria and Sari-Sari Falls, and Middleham Falls, a narrow plume of water falling 200 feet from a cliff notch. A strenuous excursion to Morne Diablotin (Devil’s Mountain) reaps glimpses of two endemic parrots, the Jaco and the Sisserou.

In 2011, Dominica unveiled one of the most unique hiking features in the entire Caribbean, the Waitukubuli National Trail. Affectionately known as the WNT, the trail covers 115 miles, spanning and twisting the length of Dominica. From Scotts Head in the south to Capuchin in the north, the trail winds from one end of Dominica to the other. The WNT passes through traditional Carib villages, ruins of 18th Century French settlements, the renovated Fort Shirley at The Cabrits, secret 'Maroon' passages where runaway slaves escaped and many more interesting historical and natural sites.

Horseback riding, river tubing, kayaking, and jeep safaris are other ways of enjoying Dominica for non-hikers.

The offshore marine environment is equally fascinating, as healthy reefs, extraordinary formations and 100-foot visibility draw scuba divers. Dominica’s waters host 22 species of whales and dolphins, making it a prime whale-watching destination throughout the winter. Beaches are mostly black sand, with a few golden strands in the northeast.

For history lovers, the capital, Roseau and Fort Shirley are fun to explore. At the Kalingo Barana Aute, visitors can watch as Kalinago Indians carve the trunk of a Gommier tree into a canoe. Cultural performances, storytelling and “spiritual cleansings” are part of the outing. Tours of a rum distillery and the Rosalie slave plantation estate are also popular. Local restaurants serve predominantly native Creole cuisine; Callaloo is the national dish.

Mas Domnik, the island’s carnival, is a pre-Lenten celebration which features calypso tents leading up to the coveted calypso monarch, queen pageantries, jump-ups and costume parades. The Other festivals include: Jazz ‘N Creole in May, The Nature Island Food & Drink Festival and Dive Fest In July, and the World Creole Music Festival in October as part of the island’s Independence Season Celebrations.

Dominica is rated as one of the top ten dive locations in the world.

Dominica is the only country in the world where sperm whales reside year-round.

What’s happening in the Caribbean 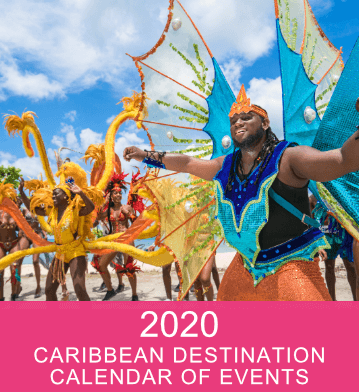 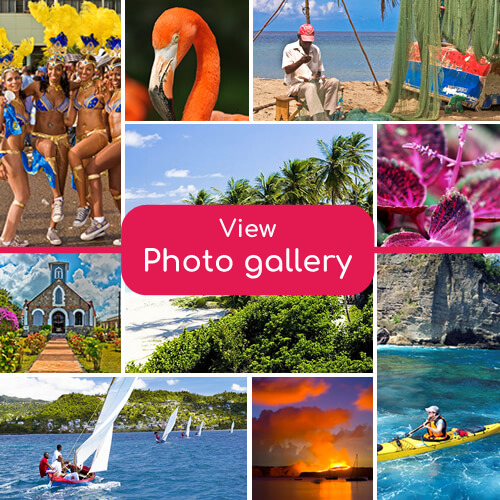 Gateways/Flying Times: There are no direct flights from Europe, however, direct flights go from London to Antigua, Barbados, St. Lucia and Trinidad, from Paris to Guadeloupe, Martinique and St. Maarten, and from Amsterdam to St. Maarten, all of which are within an hour. London: 8-8 1/2 hours. Paris: 8 hours 30 minutes. Amsterdam: 9 hours.

English is the official language.  Creole or French based patois is spoken by many.

Things To Do / Activities